Right away you need to know that Time Crisis 3 is in fact, a “rail-shooter”, meaning that it essentially provides you with a direct, linear path from level to level. This is basically a PS2 version of one of those sorts of games you saw in arcades long ago, you know, where you use one of the colorful guns to take down waves of baddies.  Of course, what makes it fun is the way the rather predictable gameplay has been wrapped around the story, which is pretty much your standard 80’s action movie of sorts. 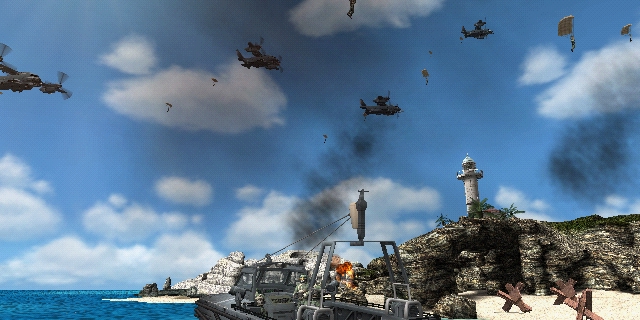 First off, if you’re interesting in tackling Time Crisis 3, you’re going to want to pick up a GunCon (that’s short of “Gun Controller”).  With the lightgun hooked up to your console, it’s pretty much the same experience you’d get in the arcades of old, which is the whole reason you play a rail-shooter in the first place, right?  Note* – believe it or not, you can still pick up a new copy of TC3 with a packaged GunCon on Amazon; there are plenty of used models as well, of course.

Anyway, back to the game…  Although the graphics are most certainly “dated” (taking on a somewhat similar look and texture as titles like “Tekken” 1 or 2), this is still a smooth, crisp and action-packed experience we’re talking about here.  What Time Crisis 3 lacks in technological oomph, it makes up for in pure violence.  Armed with your trusty GunCon, the experience takes on a whole new feel. 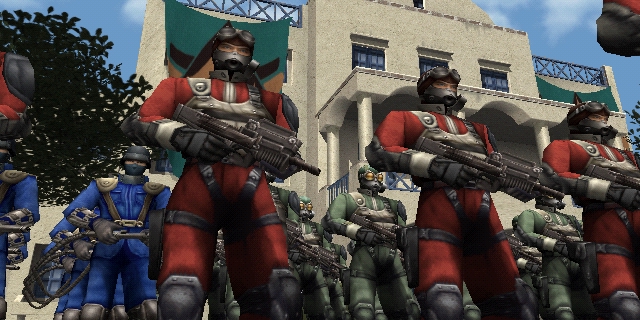 The story itself appears to be little more than an excuse to plunge you into one disparate environment after another, engaging in gun fights all the way, of course.  Having said that (and despite the game’s age), there is a fairly wide assortment of locales to shoot through, ranging from beaches and warehouses full of shipping containers, to resort villas, burning buildings and more.  This isn’t the type of game you play for the plot though; it’s all just a shallow framework that allows you to have fun blasting away at the screen as denizens of mercs pop up to thwart you.

What makes Time Crisis 3 a slight improvement over many of the other rail-shooters however is its “duck and cover” feature.  Think of it as a somewhat primitive precursor to the more advanced cover systems we have in most games today.  In essence, you can duck down between blasts, allowing you to become temporarily invulnerable as well as reload your gun.  This simple, yet dynamic mechanic makes the game much more enjoyable, perhaps even a tad strategic.  At the same time, it presents you with scenarios which take advantage of this design choice.  Again, what you’re left with is a title that acts as a sort of 80’s action movie gun fighting simulator of sorts. 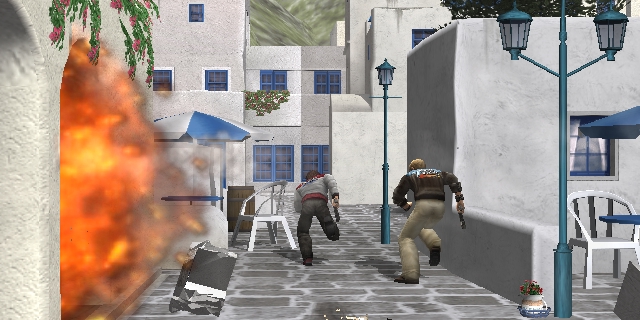 Assuming that you’re looking for this game, definitely try to find a copy that comes with the GunCon.  Furthermore, if you’re the type that likes to throw parties, try setting the game up in a common area and watch your guests delight in the game’s retro novelty and playability.