The graphics are a major letdown, but the visuals are more detailed and smoother when compared to the PC version. Although in comparison the graphics may seem good, but overall they are not very impressive. I didn’t expect any great visuals from EA and I wasn’t holding my breath hoping. 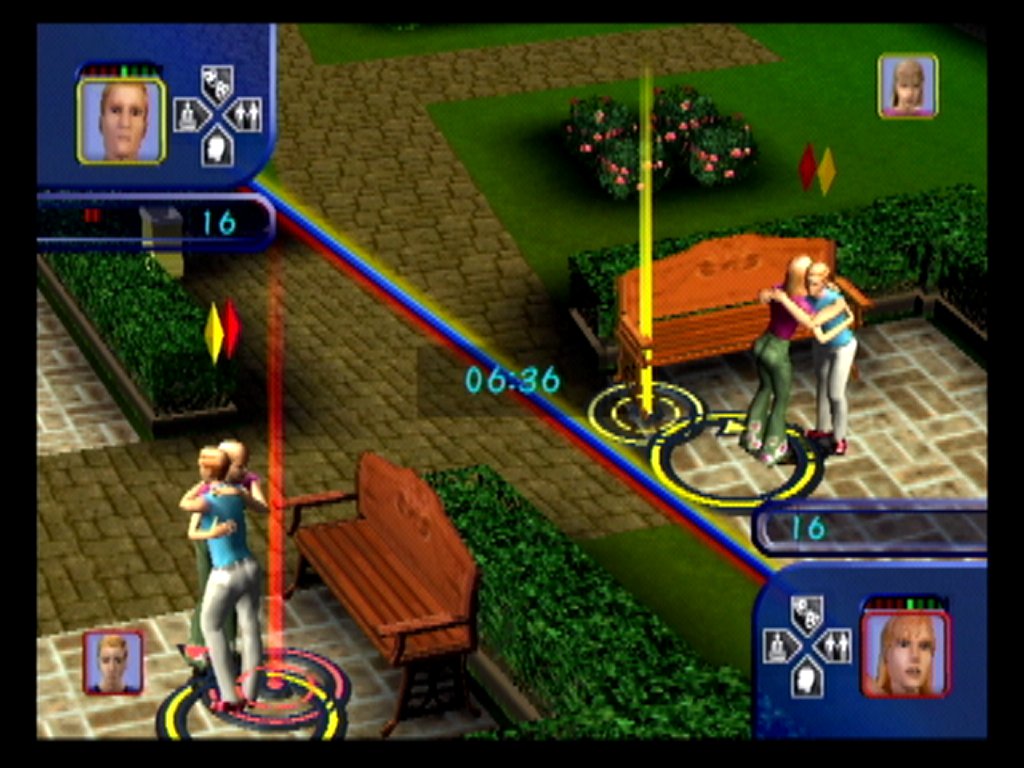 The game does have some improvements over the PC version such as better-textured environments and the frame rate is more improved than the PC version. Although there is a small amount of slow down when moving your joystick to circle around the house.

One of the most annoying things about the Sims is the horrible character voices. Generally when you are engaged in a conversation with a peer you can hear what your character is saying. The problem arises is that you character talks gibberish and it sounds like some foreign space language. Although household accessories are done well such as radios, televisions and toilets at least sound realistic.

The Sims can be basically described as the game of life. You create a character and control their day-by-day actions from eating to sleeping. The game has a really innovative set up design as everything is so detailed and well thought out in The Sims. You’ll be able to check your characters fun factor, hygiene, bladder, hunger and so on. At the beginning of the game you start off in a dream where you can get used to the environmental surrounding and how to interact with different characters. The game has a few game modes, which include the Get a Life Mode, The Sims mode and a two-player mode. The amount of customization is very impressive. You create a first name and family name and on top of that you can change the appearance of your created SIM and alter the different hairstyles, clothes, etc. 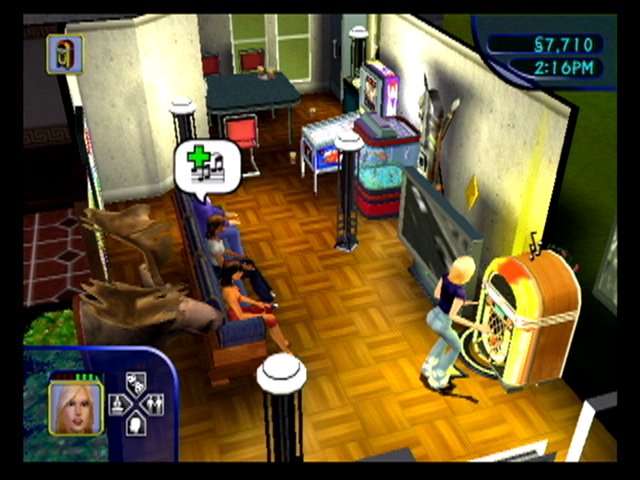 When the real game begins you start off as an unemployed male who lives at home with his mother. You start each level with different objectives such as fixing a broken TV, learning how to cook, and getting eight hundred dollars off of your mother.

Many beginners will soon learn that the game is very precise and goes far in depth to teach your character new skills. For example: Before you attempt to fix a television you must first read a mechanical book. If you don’t read the manual for mechanics you will be electrocuted by the television. Another example includes cooking a meal. If you attempt to cook a meal without reading a cookbook you will end up starting a fire in the house and wreak havoc and make the lives of fireman even more difficult. As the game moves on then you will attempt to find a job by reading the classified ads. Just make sure your character isn’t to depressed to do anything.

One of the biggest surprises the game has is how user friendly the interface is set up. It’s very easy to give commands to your character. One problem does arise though, which is the reaction time of your character. Sometimes your character takes awhile to respond to any command you give them. The environments are very interactive and very impressive. Almost everything plays some purpose to your character whether it’s sitting on a chair or taking a nap on your recliner. One of the coolest parts of the Sims is the ability to do day-to-day things such as watching TV or listening to the radio. Not only that, but you can pick the genre of TV shows and music you decide to listen to or watch. The gameplay speed and clock is extremely slow, but these settings can easily be customized. The multiplayer mode is fun as well. Multiplayer can be played in the Get a Life Mode or in the regular Sims mode. It can be basically called a cooperative mode. Both characters live with each other and they interact the same as they would in a single player mode. One awkward thing about the multiplayer is the fact that the screen is split diagonally instead of vertically or horizontally. 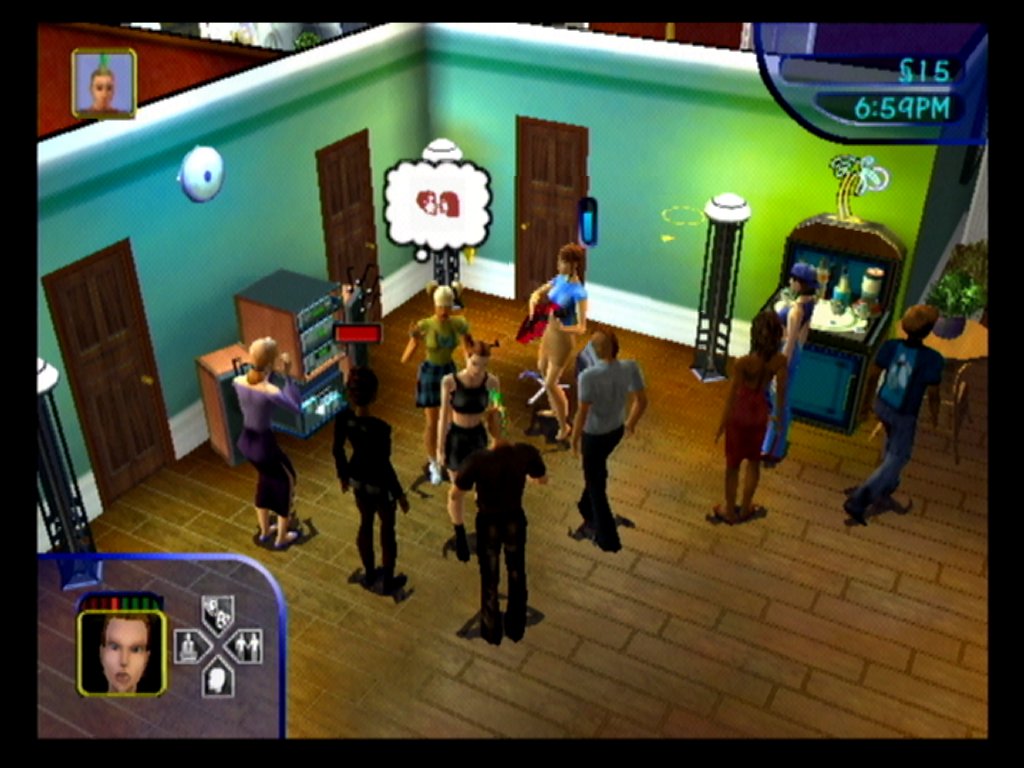 There are some problems that hinder the Sims in many ways. First off sometimes you characters take much longer than they are supposed to, to respond. Since there are so many things to make your character do its difficult not to neglect all of the important things such as bladder control, fun level and hungry level. Another problem is that completing each level in the single player mode can only access the multiplayer. Not only that, but only pieces of the multiplayer mode are unlocked instead of the whole mode in general. In the single player mode you can easily switch between your character and the characters mother. The switching is kind of useless since there is nothing that the mother can do to benefit her son (your character). Instead when you’re controlling the mother she will just complain about doing chores or any sort of work. Another problem that some may find is that the Sims is a game of patience. People who have no patience will most likely be repulsed by this game.

Many along with me will probably be shocked at how easy the control scheme is in the Sims. Before playing the Sims I imagined the control scheme being layed out a little awkwardly, but its not like that at all. The joysticks are very easy to use to navigate the entire environment and the rest of the controller makes it very easy to tell your character what to do.

The Sims is a solid game, which should have any Simulation fan playing this one for a while. The games multiplayer is loads of fun as well and is great when you have friends over. The Sims is a game you’ll be playing for a while; well at least until the next Sims game comes out.

The Sims is truly a game of patience and a rental may not be enough to experience this great game. While the Sims is a solid game, the game does have some flaws that bring its score down by quite more than you would expect. But hey who doesn’t love the Sims!