Hmmm…what might be the easiest and most direct way to describe “Medal of Honor: Frontline” to the uninitiated gamer?  Well, simply put, it’s basically something of a Normandy / D-day WWII simulation with a more arcade-like feel.  A game that’s equal parts historical refresher as well as original and fabricated.  Consider it to be something of a virtual tour across one of those iconic moments in world history where the fates of nations were being decided.  Sure, this is just a PS2 game, but taken from another perspective, it’s also something of an interactive movie of sorts.  A lot of people will likely make the direct comparison to a movie like “Saving Private Ryan”, which isn’t too far off, sparing the intense drama of the movie, of course. 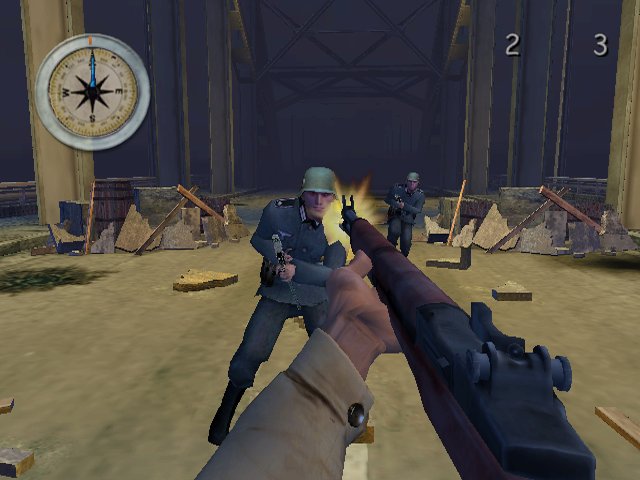 Assuming that you’re ok with solid, yet somewhat dated graphics, they HoH: Frontline certainly won’t disappoint in its execution.  For all intents and purposes, it’s still a fine-looking title in that it’s well put together and delivers at least adequate effects in the space of a suitable environment.  The quality of the sound design inherent in general combat, particularly the sounds the various weapons make, really helps to emphasize the on-screen action’s overall setting.

It’s pretty much what you’d expect from a big-budget title of its period (2002).  A neat linear story which is set up to provide you with a well-tailored and scripted experience; that’s basically what Medal of Honor: Frontline is all about.   It’ll take you across various terrains too – from little worn torn cottage villages to tight-cornered underground bunkers filled to the brim with violent enemies. 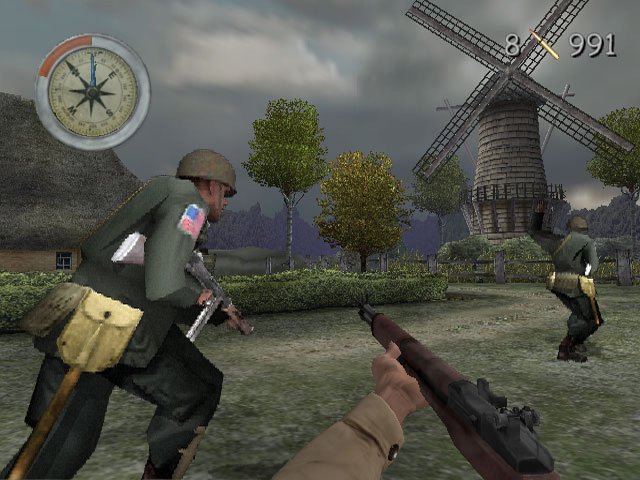 While it’s basically set up to divide subsequent missions into levels and so forth, this is a first-person shooter that only seeks to fulfill its primary duties.  Nevertheless, the game might also treat you to the odd Easter egg or glitch; if you’re paying attention (take this example from YouTube, for instance).  At its core, however, Frontline is about shooting Nazis, but maybe a bit more historical in setting, i.e. – there aren’t any zombies or gigantic mecha-Hitlers.  Needless to say, this isn’t a bad thing.  In a way, it’s actually refreshing because you know to expect around that corner, it puts you in a slightly more realistic gaming mindset which seems to touch on role-playing themes. 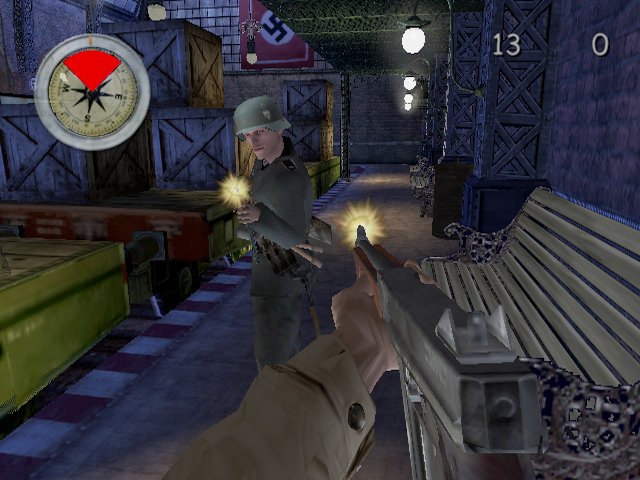 Also of interest is the medals system that was used to indicate post-mission successes and failures / accomplishments.  Receiving a gold, silver or bronze indicator, you might even say that this PS2 game preemptively foreshadowed the trophies system found on the PS3.