When introduced some years back, the Army Men series of games was a novel and unique approach to the ageless question of children everywhere – what would happen if my toys could move? After the movie Toy Story, in which plastic green Army men did in fact move and coordinate themselves, the games became even more desirable. 3DO then began a long and exhaustive search for the right game to put them in – during which time they both came close and failed miserably. After enduring some of the worst schlock the Army Men series could generate, we’ve come full circle with a game that entertains the fantasy once more – what if your toys could move, and think, and fight? This real-time strategy game answers that question and layers the game with simplified, but satisfying, scenarios for your toys.

The graphics are great, considering the amount of detail that has to go into each individual piece of equipment or soldier. You’ll see bazooka soldiers kneel on one leg and fire, just like the toy is poised to do, or half-track trucks that consistently fire away at enemy position from top-mounted guns. You’ll see flame-throwing soldiers that spout a beautiful and eye-watering torrent of flame as they melt opposing tan army men, or laser-equipped dump trucks that burn any plastic source, and haul it to the nearest refinery. All of this is played out against seemingly harmless backgrounds, mostly in the backyard and homes of regular people. The clever use of everyday items as fuel for the plastic factory is also beautifully illustrated – when you see a couple of laser dump trucks chewing away at a plastic water gun, it hits home that this is no ordinary RTS game. 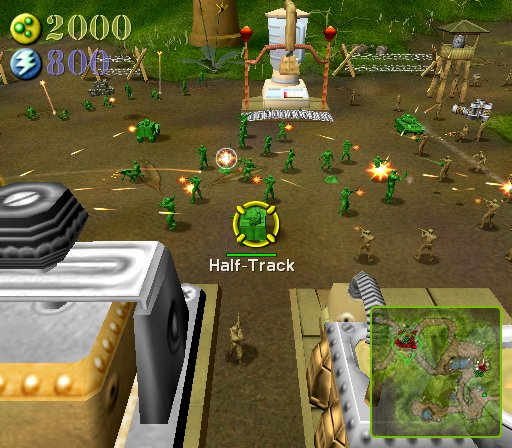 The sounds of Army Men RTS do a great job of conveying the gravity of war and the ridiculousness of your situation. There’s solid gunfire, distinguishable by weapon (the machine gunners sound different than the Tower gunners, which sound different from the half-track gunners), thunderous explosions, and realistic battlefield sounds. When a soldier goes down, he goes down screaming. When a unit is destroyed, you hear it regardless of where you’re at on the field. Although all of the soldiers have a slightly Southern accent to their voices, you will hear different vocal effects from different units.

As with most controls of an RTS game, you have to know some of the basics, like how to gather a large group of soldiers, or a particular group of soldiers, or just one soldier in a large, particular group. You have to know when to build and when to stop. You have to know where to build – a lot of the plastic sources are spread out in the game, and trucks will take fire between the source and the refinery. All of this is done with the analog stick and the buttons. It’s easy, and a little too simple, but very effective. Where the game lags is in some of the simpler missions, which seem thrown in at the last minute, like the foray through the basement where you kill all the bugs then get to the back steps. There’s no resource gathering or maneuvering – you simply shoot and move. Levels like this don’t take advantage of the deeper aspects of the game, like troop movement, artillery placement, and command-and-capture tactics. 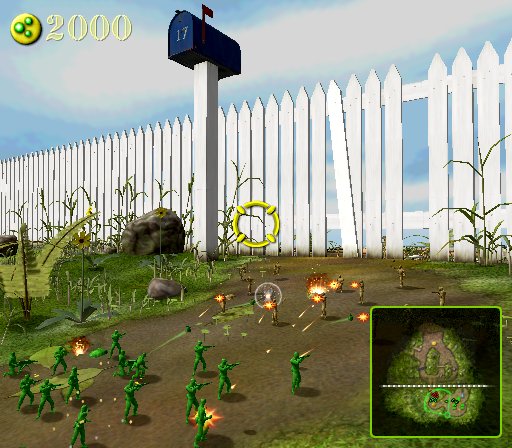 For hardcore RTS fans, the game will surely seem like the village idiot has gotten into the armory. There’s little defensive AI besides the normal kill-or-be-killed tactics of your enemy, and the options don’t allow a free-roaming campaign – you play by the scenarios set by the computer, or one of the hidden levels you uncover. But that doesn’t diminish the game’s fun at all – as a matter of fact, the quick turnaround of the simple game play is more satisfying than the lengthy, drawn-out battles of real RTS games. Army Men RTS has finally found a barracks for the Green Army that they can call home. Lawrence Neves