What does the Action Replay V2 do?

What is the Action Replay MAX?

What do these “enhancement codes” do?

Some codes allow Action Replay V2 users to gain access to hidden characters, levels, and weapons. Other codes may allow users to jump higher, gain extra lives, infinite ammo, or even fly in a game that usually does not allow such actions.

Will these codes cause my PlayStation 2 to malfunction or stop working?

Datel confirm “Absolutely not. Action Replay V2 does not affect the PlayStation2 itself; it merely changes addresses and values in a game’s memory while the game is running. If a code causes an undesirable effect in a game, simply press the reset button and make sure the codes were entered properly.”

Where can I find codes for a game that is not currently supported by my Action Replay V2?

Can I create my own enhancement codes for the PlayStation 2 AR2 V2?

There is no way to create your own codes for the AR2 V2.

The “(M)” codes cannot be turned off or deleted. These codes are called “Master” or “Enable Codes” and they MUST BE ON for Action Replay to function properly.

Does every PlayStation 2 title require a “(M)” code?

Yes, every title will require an “(M)” code to function properly with the Action Replay V2.

Can I use enhancement codes for PlayStation 1 titles that with my Action Replay V2?

Will Action Replay V2 allow me to play import titles on my PlayStation2?

No, Action Replay V2 was not designed to allow the use of import titles on the PlayStation2.

Will Action Replay V2 work with the latest version of PlayStation2?

Some codes I’ve found do not work on my AR V2. What do I do?

I am receiving an error message when loading my Action Replay V2.

What do I do if I get a message appearing saying that my DVD player version is not supported?

Why will a certain game refuse to load, or crash/freeze?

You may have too many cheat codes activated, cut down on the amount you are trying to use. Also make sure you have entered the “M” code correctly.

Where does the Dongle go?

In either memory card port 1 or 2.

I’ve got a “Hardware not detected” error?

Your Dongle probably hasn’t been inserted fully. Try carefully but firmly pushing it in as far as it will go. If you still have a problem, you need to contact your retailer for an exchange.
What does “default on/off” mean?
If set to default “ON” the code will always be turned on when you select the game.

Can I use GameShark codes on my AR2 V2?

No, If you live in the USA, you’ll need to buy the NTSC equivalent of AR2 V2. GameShark 2 V2 is also designed and manufactured by Datel, but it’s distributed in the States by InterAct. NTSC codes are different to PAL codes and will usually have no effect. www.gameshark.com

What’s the difference between AR2 V2 and GameShark 2 V2?

Does the PSX GameShark or Pro Action Replay work with the PS2?

No. The GameShark, Pro Action Replay, and other similar PSX cheat devices try to interface directly with the PSX hardware, which results in problems when used with a PS2. However, the GameShark 2 and Action Replay 2 V2 for PS2 enable codes for PSX games as well as PS2 games.

What’s the difference between AR2 V2 and Equalizer Xtreme?

Is there any way to enter new codes quicker?

Yes, Datel manufactures a USB keyboard which simply plugs directly in to any of the two USB ports on the bottom left of the PS2. 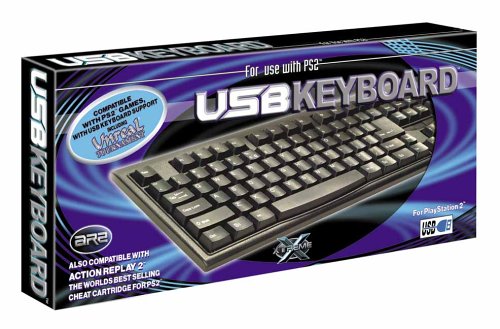 Alternatively, if you own a PC, X-Port V2 (also from Datel) allows you to download new codes to your AR2 V2 direct from the web and store your PS2 game saves on your PC’s hard drive and exchange game saves plus edit and share via the internet and e-mail.